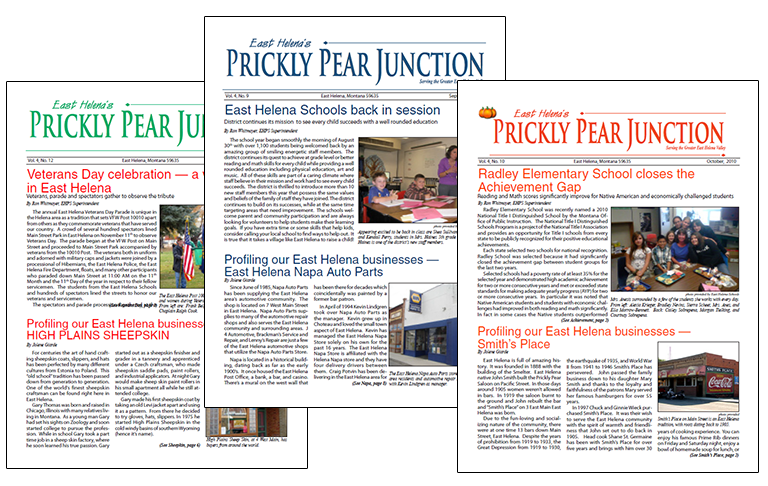 (Click on these covers to view full-size)
These are actual covers of Prickly Pear Junction printed editions from 2010. Becky Buckmaster and Jolene Giarde produced 8-page, beautiful publications every month for many years and only stopped in 2011 when costs of printing became prohibitive. I was building the official website for the City of East Helena at the time so it was logical that I take over and create a digital version of Prickly Pear Junction. Advantages of digital over print are numerous.

Sometime later, Becky Buckmaster and Jolene Giarde created an 8-page print version of PPJ and continued to produce it until 2010. By that year print media was losing favor to digital forms. In 2011 they announced they would be giving up the print version of PPJ. I believed PPJ should continue but only as a digital publication. I approached then-superintendent Ron Whitmoyer, and then-mayor Anthony Strainer, along with Becky and Jolene, and proposed turning Prickly Pear Junction into a digital publication. They agreed, gave me full ownership at no cost, and I have been producing Prickly Pear Junction online ever since.